It has been a rough start to 2015, rough and record setting, we have had more than our share of snowfall during the winter season. 2014-2015 is now the second snowiest season on record with close to 100 inches. We have been pounded with continual storms many coming within days of one another causing the month of February to be the snowiest month on record in Boston beating the previous month by almost 20 inches.* Two of the larger storms this month ,Juno and Marcus, ranked 6th and 7th respectively as the biggest snowstorms of all-time dropping a whopping 50 plus inches of snow if just 5 days. 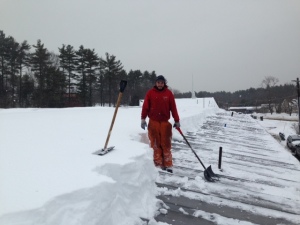 One challenge is the snow collecting on the roof tops and causing structural damage to many houses and businesses even causing several schools to close down due to possible hazards. We are trying to service as many customers as possible in between storms to get roofs cleared. Another challenge in getting the snow plowed properly is finding a place to put all the snow we have run out of places to move snow, one solution is moving it to another location but the snow dumps are all full as well. We are using our tractors and skid steers along with the dump trucks to transport the large amounts of snow.

Not only is the amount of snow a problem but the  frequency of the storms too along with sub-freezing temperatures makes removal a major challenge, there is just nowhere to put the snow. Many places report snow banks and piles as high as 15 feet tall and some streets although normally two way have been reduced to one way because the snow on the sides has gradually narrowed the passage way.

We are working hard to make sure our customers  homes and business are safely clear of snow and want to thank all our hardworking drivers, shovelers, tractor operators and office staff for all their diligence in this once in a lifetime event and also say we appreciate all the patience of our customers, we know it has been hard but together we are getting through this trying season.